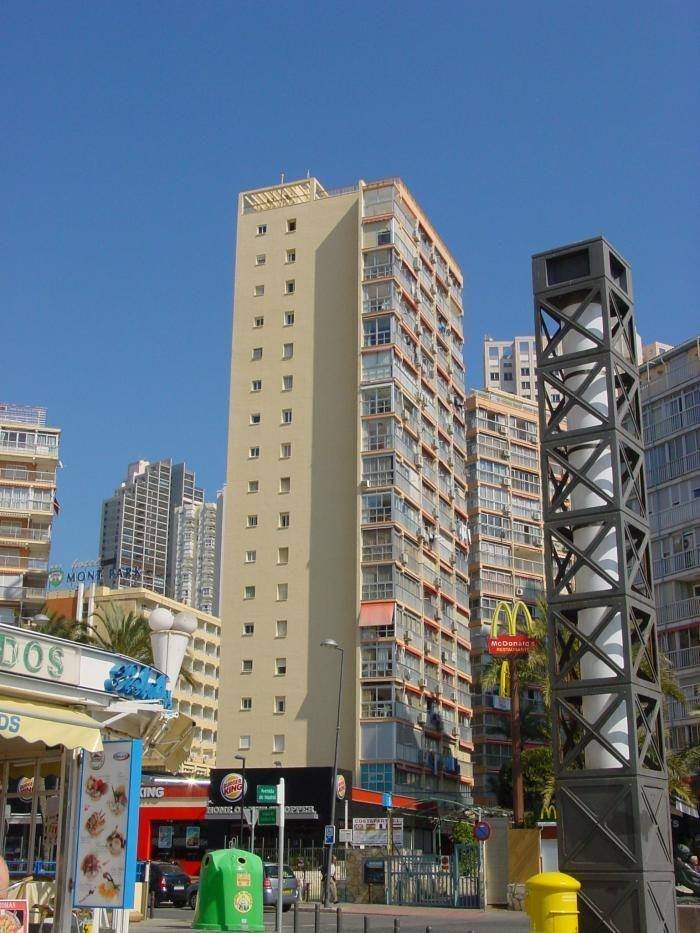 Just returned from a 4 night break at this accommodation. The apartment was basic but the location and view made it a pleasant break. Call me homely but i do like my self catering accommodation to have an oven but this apartment did have one but then i knew that before going and for 4 days i didn't mind but i wouldn't want 7 days or more there without one. I found the surrounding bars and restaurants great with plenty of choice. Had a very nice take away from Taj Mahal just across the road. Good value.! Sadly the weather wasn't brilliant but hey ho you cant have everything,
Room Tip: All beach facing i believe...But for me higher floor is better.

Las Carabelas is a complex of three apartment blocks conveniently situated at the end of the Levante Beach. We had a one bedroomed apartment which also had a pull out sofa bed in the lounge. Frankly we found it just big enough for the two of us, and you would be falling over each other if there were more of you. The site we booked on stated that there would be a four burner hob and an oven, but we only had a two burner, and no oven. However it did not say we would have a dishwasher and washing machine, but we had both. As stated in other reviews there is no maid service, but the apartment was cleaned and made up with bedding and towels for our arrival and as we were there for two weeks we were able to go to the office at the end of the first week and change all the linen. The proximity of MacDonalds and Burger King were ideal for the facility to use their free wifi for the price of a coffee. One minor problem which we encountered was that, as we knew, we had to collect our keys from the Mont Park Hotel opposite to the apartments but only the keys for the apartment had been left, and there was no remote control to open the gate of the car park. Frankly the guy in the Mont Park is not the most friendly or helpful of souls (but then the apartments are nothing to do with the hotel and they only hand out the keys) however, as we are able to speak Spanish we sweet talked him a bit and he eventually produced a remote control which he lent us so that we could get in. The following day we obtained a key from the office against a 20 Euro deposit. On the day we arrived there was a fair sized water leak from under the sink, and, as the office in the apartments was closed we walked up to the main office about 15 minutes away and within about an hour and a half a plumber arrived and rectified it. As the apartments are obviously privately owned you are at the mercy of the individual owner regarding the amount of crockery etc, but we had just enough for two. There are no balconies in the apartments but we had a good view of the sea from the window, albeit at a bit of an angle. The TV had a mixture of Spanish, French, Dutch and English. The air conditioning also served as a heater. A previous reviewer said there was wifi, sorry, but there isn't. All in all we would recommend Las Carabelas as long as you are not looking for super luxury, it did us very well for a two week break in January
A lovely 2 bedroom apartment with views over the coast. It has British TV and free wifi along with air conditioning- right behind McDonalds on the Levante beach. The apartment only has a final clean- so if you're after maid service, this wouldn't suit. But if you want a great location, don't need a swimming pool and want a home from home, then this is the place for you. Also the Taj Mahal was an excellent find- 3 courses plus poppadoms, a drink and a coffee for 7:90 Euros and cooked to perfection- just across the road from Burger King.
The location at the end of the beach is superb and the view from the apartment was amazing. The decor in apartment was nice,modern and smart and we had no issues whatsoever when we stayed for my sons 21st Birthday in February 2014 in fact we are booked to go back next week and are looking forward to it. You are near all the amenities, shops, beach and food places it is hard to beat these apartments.
Room Tip: Ask for a sea view and what a magnificent view you get you can see the whole beach for miles.
We went in September to get over an illness we were that enthralled we booked again for April . In an ideal spot next to the beach , over the top of Subway and next door to McDonalds . The apartments were spotless and were cleaned mid week. Washing machine was also in the apartments so I'm not taking as many clothes this time . Excellent bars and restaurants nearby and only a short walk to centre. Brilliant.